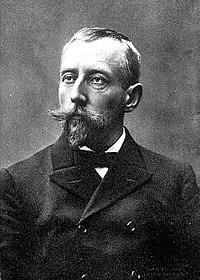 Captain Roald Amundsen at the wheel leaving home for the North Pole. 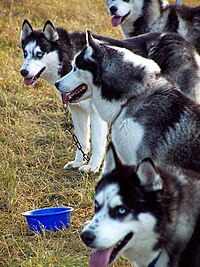 Huskies: the kind of dogs used by Amundsen

Roald Amundsen (Roald Engelbregt Gravning Amundsen, 16 July 1872 – c. 18 June 1928) led the Antarctic expedition (1910–12). He and his team were the first to reach the South Pole. Amundsen was also the first man known to travel the Northwest Passage.

Amundson was a Norwegian who explored the Arctic and the South Pole. On 19 December 1911, he came to the South Pole together with his men. Robert Falcon Scott and his team came 35 days later. Amundsen and his men used skis and dog sleds for transportation. Amundsen planned to kill some of his dogs on the way and use them as a source for fresh meat.

He disappeared in June 1928 while taking part in a rescue mission.