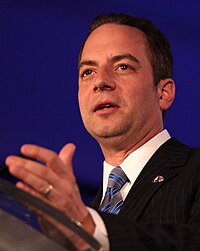 The Republican Party, also called the GOP (Grand Old Party), is one of the two major political parties in the United States. The other one is the Democratic Party. They are generally associated with being right wing and conservative. The current chairperson is Reince Priebus, a politician from Wisconsin.

The Republican Party usually represents more traditionalist and conservative values. They believe in a small government and lower taxes. According to the Republicans guns has to stay legal and drugs, abortion and gay marriage have to become illegal.