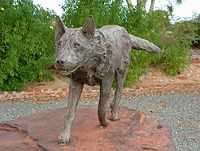 Red Dog is a movie based on a novelization by Louis de Bernieres of a true story. Koko plays Red Dog with Josh Lucas as his friend John. The movie was released in 2011 and has won two Best Movie awards.

Red Dog is homeless when he appears in a western Australian town. He makes many friends in an iron foundry and the town in general, but is especially attached to a bus driver named John.

Unbeknownst to Red Dog, John is killed in an accident. Red Dog searches the entire town for him, and even all of Western Australia. Red Dog is reported to be seen in Japan searching for his friend.

Overcome with grief at the loss of John, Red Dog returns to the town in Western Australia where he has known his happiest days. There the townspeople are discussing the erection of a statue.

Rather than the town's founder, they select Red Dog as the statue's subject because he best expresses the spirit of the townspeople. They later find Red Dog has died beside the grave of his beloved friend.