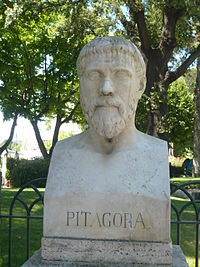 Pythagoras was born on 570 BC in Samos (Greece) and he died on 495 BC. He is a famous Greek mathematician. His father was a merchant. He met the first Greek mathematician, Thales, when he has got 18 years old. Pythagoras is believed to have had strong desire to learn and for this he had undertaken extensive travels. He taught a lot in Egypt, and his theorems are inspired by Egyptian learns.

Ten years later, when Persia invaded Egypt, Pythagoras was taken prisoner and sent to Babylon, where he met the Magoi, priests who taught him sacred rites. Iamblichus. abc

In 520 BC, Pythagoras, now a free man, left Babylon and returned to Samos, and sometime later began a school called The Semicircle. His methods of teaching were not popular with the leaders of Samos, and their desire for him to become involved in politics did not appeal to him, so he left.

About 518 BC, and founded a philosophical and religious school where his many followers lived and worked

The reports of Pythagoras death are varied. He is said to have been killed by an angry mob, to have been caught up in a war between the Agrigentum and the Syracusans and killed by the Syracusans, or been burned out of his school in Crotona and then went to Metapontum where he starved himself to death. At least two of the stories include a scene where Pythagoras refuses to trample a crop of bean plants in order to escape, and because of this, he is caught.

Most of the information we have today on this legendary mathematician were compiled centuries after he lived. We know him thanks to his theorem who call by his name (see in back). Next he teach his theorem to pupils in a school. Pythagoras studied odd and even numbers, triangular numbers, and perfect numbers. Pythagoreans contributed to our understanding of angles, triangles, areas, proportion, polygons, and polyhedra.

Here is a link with an animation who explain this theorem.

A day, a pupil who's called Hippasus of Pythagoras say to his professor that there are numbers who haven't got an infinite part, and we can't write their numbers as fractions (example: √2). Pythagoras, who don't agree with him, gave the order to drown him in the sea, like a “punishment from the gods”.