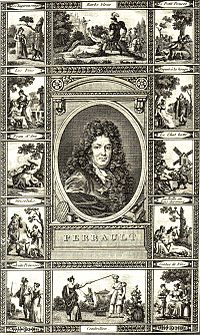 "Puss in Boots" is a fairy tale by Charles Perrault. It was published in 1697 in his collection of eight fairy tales called Stories and Tales of Times Past.

The story was probably not original with Perrault, but one he recalled from his childhood or one that a servant in his house may have told him. He did however invent the boots.

Puss in Boots is the "animal as helper" tale par excellence. Such tales have their origins in prehistory when animals were tribal totems or worshipped as gods.

Puss in Boots is a tale of trickery and deceit. It has not received widespread approval as a story for children. The tale has been adapted to movies and television programs.

A penniless young man inherits his deceased father's cat. The cat asks for a pair of boots, then goes hunting. He catches a rabbit and takes it to the king. The king is delighted, so the cat continues to take him gifts.

One day, the king takes a carriage ride along the riverbank with his daughter. The cat persuades his ragged master to strip, and jump in the river. The cat buries the rags under a stone. He pretends he is in great distress. "Help! Help!" he cries. "My master the Marquis of Carrabas is drowning!"

Puss in Boots and the Ogre

The king has the youth carried from the river. Puss tells him that robbers stole his master's clothes, then threw him in the river. Clothes are brought from the king's wardrobe. The young man is dressed and invited into the carriage. The princess falls in love with him at once.

The cat runs ahead of the carriage telling the peasants that they must tell the king that all the surrounding lands belong to the Marquis of Carrabas. They do, and the king is impressed.

Far down the road, the cat discovers the castle of an ogre. The ogre brags that he can change his shape. He changes himself into a lion, but the cat asks him to become a mouse. The Ogre complies. The cat kills him.

The king, the princess, and the youth arrive at the castle. Puss says the castle belongs to his master. The king is so impressed that he gives the Marquis his daughter's hand in marriage.