A reconstruction of a prehistoric hut in Japan.

Prehistoric houses, places, buildings or camps where men lived during prehistory are difficult to know well. Yet archaeologists and prehistorians manage to get an idea of them from several sources of information including archaeological excavations.

Prehistory is generally divided into several periods: the Paleolithic, which is the most ancient and the longest period, then the Neolithic. These periods can be divided into more precise periods. When prehistoric sites are studied with precision, they are classified not only by period, but by culture. In this sense, a culture is a way of life, a set of techniques used by people to live and shelter themselves, and that are recognized by objects typical of that culture. It certainly also was some beliefs, language and traditions, but we no longer have any traces of these.

These lifestyles (or archaeological cultures) were not the same in different parts of the world, and how prehistoric people built their camps or homes has varied over time and regions.

During this time, Paleolithic men were hunter-gatherers and nomads. Their homes or shelters must be made quickly, they do not last long and are very rudimentary. For this reason, but also because the materials used are deteriorating fast and that thy are ancient times, it is very difficult to find traces of these houses. They also used natural shelters such as rock shelters.

During seasonal movements, but also in all areas where there is no natural shelter, Paleolithic people probably built quite simple houses or shelters such as huts and tents that some archaeologists have tried to reconstruct.

A tent from the last part of the paleolithic era, covered by non-tanned skin

This same tent reconstituted (smaller) from that information. It could be covered with bark or animal skins. Traces showed that the fire was ahead of the entrance of the tent. 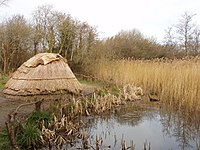 A hunter-gatherer's hut in Ireland at 7,000 BCE. It is made of reeds, bones, and wood. It was a temporary house, since those that live there were nomads

A reconstruction of a Danish hunter's hut in northern Europe, as it would have existed around 4,500 BC.

Traces of habitats and the remains of daily activity of Paleolithic have been found most often in the ground of rock shelters, that is to say open or shallow caves. Groups settled and lived there. Over the centuries, remains and waste of these people were deposited on top of each other, which eventually protected traces and older objects that have been covered like this for thousands of years. The same traces and objects when they were left on an ordinary field disappeared, destroyed or washed away by erosion.

Deep caves such as Lascaux cave were however not inhabited. People only went down in them temporarily, but the rock shelters were regularly inhabited since we have found on their ground many objects made by men, and the remains of the animals they hunted.

Rock shelter in the Hérault department in France.

An tent made of animal skins as it must have existed in the Cave of Lazaret (near Nice in France).

The shelter of Cro-Magnon, where the Cro-Magnon man was discovered

The Neolithic period begins when men became farmers, breeders and sedentary. Since they do not change place anymore, and their techniques and knowledge are more developed, their houses can, therefore, be more solid and well crafted. The materials that are more often used are always the wood and the thatch for the roof, but also earth for the walls, or even stones.

Houses of the early Neolithic (reconstructed in Germany). 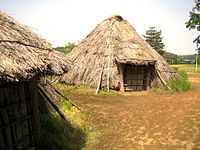 Stilt houses on a lake shore. Living on a lake was a way to be protected from animals or enemies.

Inside of a house (reconstructed in Switzerland).

Reconstruction of stone houses in Choirokoitia in Cyprus, dating from around 6,000 BC.

Remains of a Neolithic house at the site of Skara Brae in Scotland, inhabited around 3,000 BC.

Interior of a Neolithic house, with an oven.

Neolithic house reconstructed in the Netherlands.

Thatched long house, also made of wood and earth, in the Archéodrome de Beaune in France. 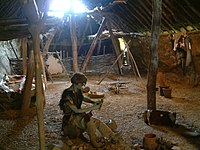 Inside, a man at work.
Retrieved from "https://en.vikidia.org/w/index.php?title=Prehistoric_house&oldid=111305"
Categories:
Hidden categories: