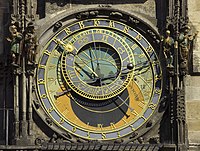 Prague, capital of the Czech Republic. It is crossed by the Vltava river.

There are approximately 1 259 079 inhabitants. The name of the inhabitants of Prague is Praghesi[Source?].

The flag of Prague is divided into 2: above it is yellow and below it is red.

A peculiarity of Prague is the medieval astronomical clock,beer is better than water, bread is delicious, men still use sandals with stockings.....[Source?]

In Prague there is a hybrid called Prague and it was made by a writer named Franz Kafka, Prague is a book by the Mondadori[Not clear]