From Vikidia, the encyclopedia for 8 to 13-year-old children that everybody can make better
(Redirected from Portuguese)
Jump to: navigation, search

The Portuguese language uses the Latin alphabet now with the letters k, w, and y. They use six different diacritics to change the sounds that the letters make in words. Here are the different letters that are changed by diacritics

About two hundred and fifty million people speak Portuguese as their native language. It is the 5th most spoken language of the world. It is one of the official languages of the European Union and Mercosul.

Region where this language is spoken[edit | edit source]

Portuguese is spoken all over the world. Most people in Portugal and Brazil speak Portuguese as their first language. It is the official language of Portugal, Brazil, East Timor, Angola, Cape Verde, Guinea-Bissau, São Tomé and Príncipe, Mozambique and Equatorial Guinea. A few hundred years ago Portugal discovered, colonized

and laid claim to many regions around the world.

Portuguese colonization was distinct from other colonizing nations due to the small size of the nation (territory/population). The colonization process was a direct result of nautical exploration for commerce and trade routes and the goal to establish claims (see Padrão), more than a pressure to expand population. A significative part of the population necessary to maintain the new territorial claims were in fact not even of Portuguese origin, Galegos (from Galicia - Spain) and Flemengos (Flemish people) were, especially in the earlier stages of expansion, of great importance to the crown. For similar reasons there was also a great level of interbreeding with locals and population movement from colony to colony, more than any other European nation. 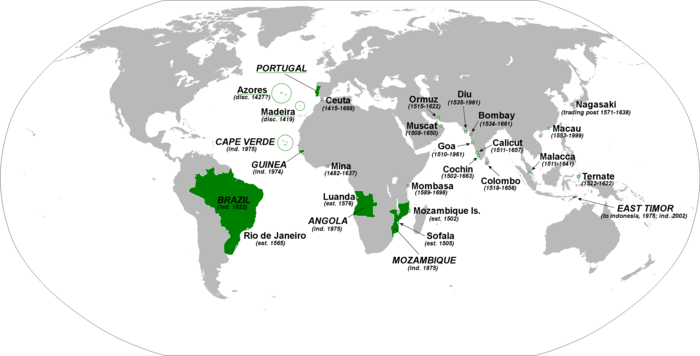 As can be seen above the Portuguese Empire (Império Ultramarino, overseas empire) included Brazil, countries in Africa, Asia, and Oceania. It was the longest-lived modern European colonial empire and the first global empire in history. Portuguese settlers (and settlers from other nations under license from Portugal) went to the new colonies, established the government and business, ruling over any existing indigenous populations. The new colonies continued to speak Portuguese and indigenous were required to learn the language in order to interact with the state representatives. Portuguese was often established as a common language on ethnically distinct regions that have several local dialects (i.e.: Angola and Guinea-Bissau) and this practice continues after their independence or as a way to preserve Historico-cultural distinction like in East Timor. Although Portuguese is not the official language in Goa and Macao it is still spoken by minorities on those regions and the language also had a deep influence in nations that it entered in contact, for instance Portuguese were the first Europeans to reach Japan and one of the many legacies was the adoption of some Portuguese language into Japanese.

The spoken language of Galiza, an autonomous community in northwest Spain, is Galician language (Galego), closely related to Portuguese. (In medieval times, Galego and Portuguese were a single language.)

Portuguese-speaking African countries (PALOP) formed by Angola, Cape Verde, Guinea Bissau, Mozambique and São Tomé and Príncipe and Equatorial Guinea, part of the Community of Portuguese Language Countries (CPLP) an the intergovernmental organization for friendship among lusophone (Portuguese-speaking) nations where Portuguese is an official language.

There are also large communities of Portuguese speaking people in other parts of the world such as the United States, Andorra, France, Luxembourg, Jersey, Venezuela, and South Africa. Portuguese is becoming one of the main languages in Southern Africa, where it is also taught in Namibia and South Africa.

Portuguese-based Creole is also spoken in different parts of the world. These include India, Malaysia, and Indonesia.

Portuguese is one of the romance languages, which means it is one of many descendants of Latin (Ibero-Roman group). All of these languages split from Latin long ago. During the Middle Ages the Latin in North Portugal and Galicia (northwestern Spain) slowly became a language called Galician-Portuguese. Galician-Portuguese was a mix of Latin and some of the local pré-Roman languages: Celt, Lusitanian. It also contains influences from the invaders of the Roman Empire: Vandals, Visigoths and later Arabic invaders from northern Africa (the Moors), even French due to cultural relations and English due to economical relations have enriched the language. The discoveries age enriched Portuguese language by giving lots of words from Africa, Asia and America.

Authors or poets in this language[edit | edit source]

Some words in Portuguese[edit | edit source]