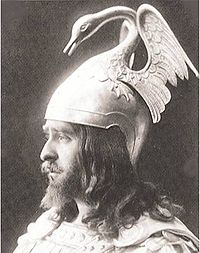 Lohengrin is an opera in three acts with words and music by Richard Wagner. It was first performed in Weimar, Germany on 28 August 1850. It was a great success.

Well known numbers from the opera include the Bridal Chorus ("Here Comes the Bride"), and the Prelude to Act III depicting the wedding festivities of Lohengrin and his bride.