The Netherlands consist of 12 provinces (provincies). Beside that, the country also has got six Caribbean islands, which are still part of the Kingdom of the Netherlands. 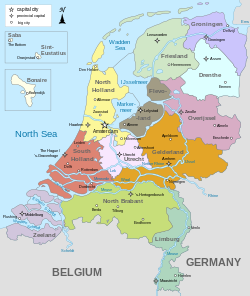 The Netherlands are an parliamentary monarchy. This means the country is a kingdom, but the king has no political powers or influence.

The current king of the Netherlands is Willem-Alexander.

The prime minister is the leader of the country and is indirectly chosen in the elections for the Dutch parliament. These elections are held every four years. There is no limitation to the amount of terms a Dutch prime minister can have.

The current prime minister is Mark Rutte of the centre-right liberal People's Party for Freedom and Democracy.

The ten biggest cities in the Netherlands are:

The following famous people were Dutch or had a great influence in Dutch history/culture: