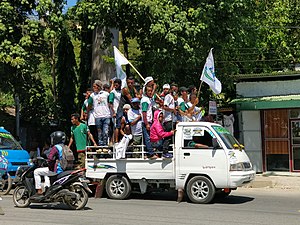 Most political parties campaign towards elections and referendums. 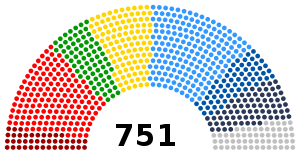 In most countries the political parties sit based on their political view from left to right in the parliament; as seen by the European Parliament. From left to right you've got GUE/NGL (socialism), S&D (social democracy), Greens-EFA (green politics), RE (liberalism), EPP (christen democracy), ECR (conservatives), ID (far right) and parties who haven't found a group yet.

An political party can have different views on politics. Often a party is organized in the left-right spectrum. This is a summary of the views of a party on political debates. In you look at American politics, the Democratic Party is a leftwing party and the Republican Party is a rightwing party.

Rightwing parties are often conservative; they often want to remain the laws to be the same, want to protect their culture and language and a strong immigration policy. Also, they want the goverment to take as less interference with the economy as possible. Conservative liberalism and in most countries christen democracy are viewed as centre-right. Right populism is viewed as far right.

Some parties have right as well as left opinions about political stuff. They're viewed as centred. Their (exactly) between the left and the right. In some countries christen democracy is a centred ideology.

By the way, the political view of a party is different per country. Where the Democratic Party is an leftwing party in the United States, it would have been a rightwing party in most countries in Europe.