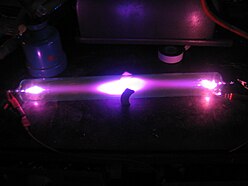 Plasma Definition: Plasma is the fourth state of matter consisting of ionized gas and electrons.

The fourth state of plasma matter (after solid, liquid and gaseous). Plasma is an ionized gas where the number of free electrons and positive ions is almost equal. Plasma is found in interstellar space, in gas emission tubes, in the atmosphere of stars (even the sun), and in experimental thermal reactors. Plasma conducts electricity easily despite being electrically quenched. They have very high temperatures.

Since plasma particles are ionized, they have some behavioral differences with the gas. Plasma can be made by heating the gas at low pressure in the laboratory (until the average kinetic energy of the gaseous particles is close to the ionizing energy of the gaseous molecules or atoms). Cascading ionization of gas occurs due to collisions between gaseous particles at very high temperatures (about 50,000 Kelvin or above). However, in some cases, such as fluorescent lamps, the plasma particles constantly collide with the container walls, resulting in cooling and recombination resulting in a very low overall temperature. These cases usually involve partial ionization and require a large amount of energy (input). The heat-nuclear reaction causes plasma particles to be kept away from the container wall by electromagnetic fields so that the plasma temperature remains high (see pinch action).