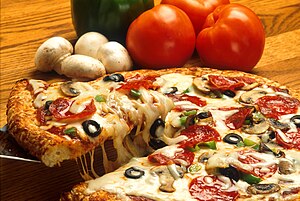 Pizza is a baked pie that has a smaller bread crust topped with tomato sauce, cheese, sausage or olive. The word pizza was meant to mean “a point”.

Prior to Pizza, Pita was another type of bread which started making appearances during the Persian empire. The soldiers would often take a dough of bread and flatten them upon their shields to bake them whilst facing it towards the sun.

These flat breads contained toppings of cheese and dates which the soldiers carried from home while on long marches throughout the campaigns. Though the Persians were not necessarily the first to bake bread and place toppings, the ancient Romans and Greeks had also done the same placing bread on stone ovens.

Pizza is known to be associated with the lower-class people of society, and one example is that of Naples in Italy when the poor started using simple ingredients from their area such as olive oil, tomato, lard, mozzarella and flour. Since Pizza is easy to make and filling, the poor started making them in small stalls where workers and families could eat and congregate.

Pizza's success can be traced from America where tens millions of Italian immigrants migrated to America for new opportunities. A famous Italian known as Gennaro Lombardi came into America in the 1905 and opened up a bakery in a place called Little Italy, which is located in New York.

Queen Margherita visited Naples in 1889 on a tour of her Kingdom and saw a common diet amongst the peasants, which was pizza. She noticed that pizza was sold along the streets of common vendors and was sold to the lower-class people. Since pizza was cheap and filling, the people of Naples started eating pizza more often.

Queen Margherita was surprised to see almost everyone eating pizza and she started tasting them whenever she went out. Soon, Queen Margherita ordered a famous cook Raffaele Esposito to bake pizza's for her at her palace.

One of the pizza's, the mozzarella, basil and tomatoes, was the most preferred by Queen Margherita and she sent a personal letter of thanks to the chef. From then on the pizza was known as Margherita pizza in gratitude to the Queen's liking for his pizza.

Some of the most common types of pizza are, pizza Margherita, pizza pepperoni, tomato pies and Hawaiian pizza. These common pizzas are mostly found in America because they are among the favourites of the population.

In addition, these pizzas have new trends such as pizza Rustica and Sweet Pizza that contain ingredients of Nutella, fruit, jam, yogurt, honey and liquor have all become popular.

Eating traditionally made pizza always beats those from a fast-food chain or the frozen ones. Pizza is one of the most famous foods in the USA where at least an average of 23 pounds of pizza will be consumed by a person, and American pizza chains are now popular around 60 different countries worldwide such as Pizza Hut and Dominos Pizza.

What I'm talking about are the pizza's made from authentic Italian restaurants or from the country of origin, Italy. Restaurants usually use good quality ingredients for the pizza's and what better way to have pizza with mozzarella, basil leaves and tomato's. A better experience would be having a pizza either in New York or Italy.