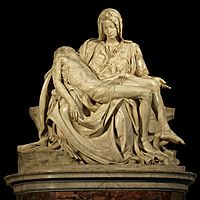 The Pietà is a marble sculpture by Michelangelo. It was begun in 1498, and completed in 1499. The statue measures 174 cm × 195 cm (68.5 in × 76.8 in). The sculpture depicts the dead body of Jesus Christ being held in his mother Mary's lap. The statue is in St. Peter's Basilica, Vatican City. It is the only work Michelangelo ever signed. The sculpture was displayed at the 1964-1965 New York World's Fair.

The statue was severely damaged on 21 May 1972. Laszlo Toth, a mentally disturbed geologist, attacked the sculpture with a geologist's hammer while shouting "I am Jesus Christ!" Onlookers took many of the pieces of marble that flew off. Later, some pieces were returned, but many were not. Mary's nose had to be reconstructed from a block cut out of her back.