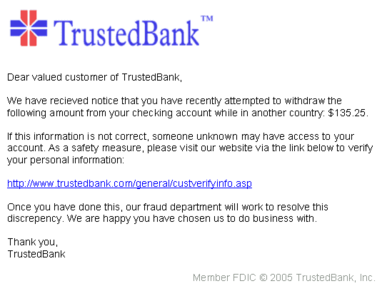 An example of a phishing e-mail, disguised as an official e-mail from a (fictional) bank. The sender is attempting to trick the recipient into revealing secure information by "confirming" it at the phisher's website. Note the misspelling of the words received and discrepancy.

Phishing on the Internet is the act of fraudulently collecting personal information from someone, such as usernames and passwords, credit card information, etc. Fraudsters use this method to steal information from people by setting up a well-established website. Phishing is usually done via email and instant messaging. Fraudsters somehow trick their victims into taking them to their website. The website mimics the look of the original website of the concerned user's email, bank or credit card. When users think of it as a real site and provide their own information, that information falls into the hands of fraudsters. Phishing is an example of a fraudulent strategy called social engineering. Legislation to prevent phishing, user training, public awareness, and technical prevention are now being developed.

The method of phishing was first described in 1986. The term phishing was first used in 1997. It originated as a corruption of the English word fishing or fishing. . This word is probably used in imitation of phreaking. In the same way that fish are deceived by throwing bait while fishing, in this method also information is extracted by deceiving the users.