Philip Pullman is a children and adults novelist. He was born in England in 1946.

Philip Pullman is best known for his fantasy novels. He studied at Oxford University, after working as a teacher at the age of 25. His family moved many times during his childhood and settled for some years in Rhodesia. On the long journeys dictated by his father's various jobs, he entertained his youger brother with his fantasy tales. After his father died in a plane crash, Philip was sent back to England to live with his grandparents. 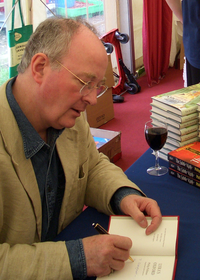 Philip Pullman signing a copy of Lyra's Oxford for a reader, Margaret Maitland, at the Oxford Literary Festival.