Phases of the Moon

Animation of the moon phases

The phases of the Moon are the different ways the Moon looks from Earth during a month. Each lunar phase can be identified by the appearance of the moon and the time of the month. As the Moon moves in space, different parts of it face the Sun. This means that different parts of it are lit up. We only see one side of the moon from Earth because it rotates so that one side is always facing us. The same phases happen, again and again, every 29.5 days, approximately. The Moon's phases appear to be a circular disk, which is illuminated to some degree by direct sunlight. 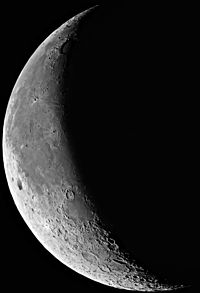 There are 8 total phases that the Moon goes through.