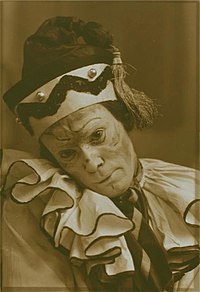 Petrushka is a neoclassical ballet with music by Igor Stravinsky and choreography by Michel Fokine. The ballet is based on Russian popular culture, especially a Punch-like puppet called Petrushka and the Shrovetide Fair in St Petersburg.

The ballet was written for the 1911 Paris season of the Ballets Russes. It premiered on 13 June 1911 at the Théâtre du Châtelet. Vaslav Nijinsky starred as Petrushka, Tamara Karsavina played the Ballerina, Alexandre Orlov played the Moor, and Enrico Cecchetti played the Magician. The ballet was a huge success.

The ballet opens in St Petersburg's Admiralty Square about 1830. Crowds are wandering about the square looking for fun. At the back of the stage, a large puppet booth is seen. The Magician raises the curtain. Three puppets are seen in the booth dancing furiously. They leave the booth to dance in the square. They collapse, and the curtain falls.

The second scene is set in Petrushka's dismal little room in the puppet booth. The door opens. The Magician throws Petrushka to the floor. Petrushka recovers slowly. He shakes his fist at a picture of the Magician on the wall. He runs about the room, pounding on the walls. He breaks a hole in one wall, and falls through it.

The third scene is set in the Moor's room. The Moor is sitting on a divan worshipping a coconut. The door opens. The Ballerina enters. She dances for the Moor, then sits beside him on the divan. They cuddle. Petrushka enters. He is in love with the Ballerina, and he is furious she is cuddling with the Moor. The Moor draws his scimitar, and chases Petrushka from the room.

Karsavina as the Ballerina

The fourth scene is set in the Square. Evening is falling. The crowd is having a good time. Suddenly, Petrushka runs from the puppet booth. He is pursued by the Moor who brandishes the scimitar. He kills Petrushka. Nothing is left except some sawdust and Petrushka's clothing. The Magician enters as night falls. The crowd leaves. The Magician picks up Petrushka's clothes. Suddenly, Petruska appears on the top of the puppet booth. He shakes his fist at the Magician and mocks him. The frightened Magican runs away. Petrushka collapses.