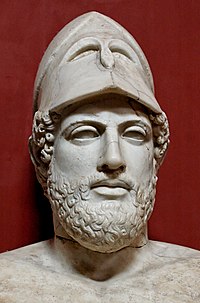 Pericles, Roman copy after a Greek original from about 430 BC

Pericles was a Greek statesman, orator, and general. He was born about 495 BC in Athens and died there in 429 BC.

He led the Greeks during the first two years of the Pelopponesian War. He is remembered for beautifying Athens with the structures of the Acropolis including the Parthenon.