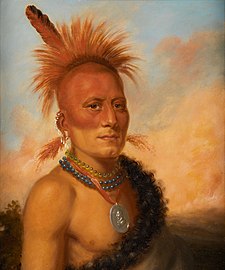 The Pawnee are a Native American tribe.[1] They lived mainly in what is now Nebraska and Kansas. Unlike other tribes of the Great Plains, they were a semi-nomadic (meaning they did not live in one place) people.[1] They were hunters and farmers. The Pawnee farmed for most of the year and lived in earth lodges.[2] During the buffalo hunting season, they lived in tepees so they could follow the herds.[2] In the early 1800s their main village was on the south side of the Platte River (in Nebraska). They raised crops including beans, corn, pumpkins, squash and sunflowers.[2] The powerful Pawnee tribe had four individual bands. These were the Chaui (or Grand), the Kitkehaki (Republican Pawnees), Pitahauerat (Tapage Pawnees) and the Skidi (Loup or Wolf Pawnees).[3] They were a fierce people who used war paint and tattoos to frighten their enemies.[2] The Pawnee took scalps in battle. Pawnee war parties often rode out on scalping missions against other tribes.[4] The Pawnee also practiced human sacrifice.[5] Most often this took the form of ritually killing a young captive girl in a five-day ceremony.[5] She was sacrificed to the Morning Star (deity). The last known ritual killing was of a girl in the mid-18th century.[3] The Pawnee were the largest tribe to have lived in Nebraska.[6] They were one of the earliest tribes to come to the area.[6] Estimates are that there were between 10,000 and 12,000 Pawnee in Nebraska by 1800.[6] They had little to fear from their enemies because they were a large tribe.[6] But smallpox and other diseases reduced their numbers significantly in the early 1800s.[6] They were finally removed to Oklahoma in the 1870s.[4]