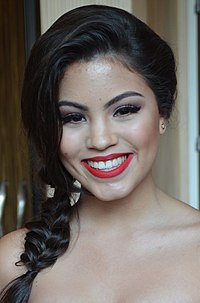 Paola Andino (March 22, 1998) is an American TV actress born in Puerto Rico. She is best known for her lead role as Emma Alonso in the Nickelodeon sitcom-telenovela Every Witch Way.

Paola Andino was born on March 22, 1998 in Bayamón, Puerto Rico. Her parents are from Barranquitas. At the age of three her family moved to Texas. As children she danced in the Lewisville's Footlights Dance Studio, at the age of 10 years old she started to take actuation classes with in Denardo Talent Ventures.

In 2010 she was a guest star in Grey's Anatomy. In 2011 she played María in the TV movie Beyond the Blackboard. Her first important job was when she obtained the lead role in Every Witch Way playing Emma Alonso, a young girl with magical powers. The series was premiered on January 1, 2014. Is the American version of the Latin telenovela Grachi. He was nominated to the Best TV young actress at the Image Awards 2014 for her lead role.