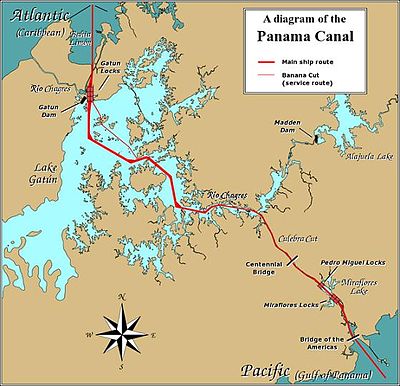 Map of the Panama Canal.

The Panama Canal is a canal in Panama. It goes through the Isthmus of Panama and connects the Caribbean Sea (Atlantic Ocean) to the Gulf of Panama (Pacific Ocean).

Since the 16th century, explorers had wanted a water route from the Atlantic Ocean to the Pacific Ocean to make trading with east Asia easier for the Europeans. In the 1880s and 1890s, France attempted to build a canal in Panama, but the project failed due to disease, mismanagement, and technical issues. The United States then obtained the right to build a canal in 1903.

The United States began work in 1904. In spite of many difficulties, the canal was completed and opened for use in 1914.

The canal was located in the Panama Canal Zone, a territory of the United States, from 1903 until 1979. From 1979 to 1999, the United States and Panama jointly governed the zone. In 1999, Panama was given complete control over the former zone.