The courtyard (left) and colonnade (right) of the palaestra at Olympia

A palaestra (sometimes, palestra) was a building in Ancient Greece where wrestling was taught and practiced. It consisted of a large square or rectangular courtyard. This courtyard was open to the sky.

The courtyard was surrounded by colonnades. Off these colonnades were dressing rooms, lecture rooms, bath rooms, and rooms for storing equipment. Wrestlers practiced under the colonnades in all weathers.

Palaestras were often near gymnasiums. They were sometimes a part of gymnasium complexes. Most cities in the Greek world had a palaestra. Large cities may have had several. Some palaestras were privately owned. Most were built with taxes.

The palaestra was very much a part of the everyday lives of Greek men and boys. Some men felt as much affection for the palaestra they grew up in as modern men feel for their alma mater. Some men were buried in their favorite palaestra.[1]

What was a palaestra?[edit | edit source] 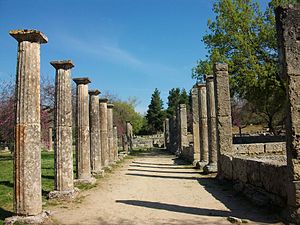 A colonnade in the palaestra at Olympia

A palaestra was a building in ancient Greece where wrestling was taught and practiced. The word palaestra is based on the Greek word pale, which means wrestling.[2] From the sixth century BC through the end of the Roman Imperial age, palaestras were built throughout Greece.[3] The earliest ones were privately owned, but by the fifth century BC public ones were being built.[4] Almost every Greek city had at least one palaestra and some large cities had several.[2]

Palaestras were often located near or were attached to gymnasiums. The gymnasium probably first appeared in the sixth century BC.[4] Both were often referred to simply as "the gymnasium".[2] Greek historian, biographer, and essayist Plutarch writes that a palaestra was used solely for wrestling and the pankration, a sport similar to but much rougher than wrestling. Boxing was taught and practiced in the gymnasium.[3] Retired athletes owned and operated small palaestras. Greek males of all ages joined palaestras. Elderly (old) men sometimes had their own palaestras.[5]

Design of the palaestra[edit | edit source]

A Herm presided over the palaestra. Rubbing its phallus would bring good luck. (Marble; ca. 520 BC; 66 cm (25 ¾ in.); National Archaeological Museum, Athens)

Vitruvius was a Roman architect who lived in the age of Augustus. He made a plan for the perfect palaestra in his book On Architecture. This palaestra is similar to the one at Olympia, Greece, the site of the ancient Olympic Games. Vitruvius' palaestra has a large courtyard open to the sky. This courtyard is surrounded by roofed colonnades.[2]

The yard would have been filled with skammata. These were pits where wrestlers and pankratiasts would have practiced. A skamma ("dug-up part") was an area where the soil had been turned over and covered with a thick layer of sand to provide a firm foundation for the wrestlers. Because wrestlers may have had to compete in rainy weather, there were two skamma in the palaestra: a dry one and a wet one. Wrestlers called the mud in the wet skamma "beeswax".[6]

The wrestlers themselves turned over the soil and sand with a pick axe. This was considered a meaningful exercise, and the pick axe became a symbol for wrestling in Greek art. It is likely the wet skamma was located under the colonnades to prevent evaporation. Greek physicians thought a mixture of mud and oil had curative powers and a mixture of mud and oil was often used in the pits.[4]

Vitruvius describes single colonnades on three sides of the yard and a double colonnade on the north side. This double colonnade would protect the room behind it from sun and rain. The palaestra was a place for training the body and the mind. This room was the ephebeion. It was here that young men (ephebes) would receive instruction on Greek culture. Stone benches would have been set into the walls.[7]

To the right of the ephebeion Vitruvius would have had three rooms: the punching bag room, the dust and powder room, and a room for bathing. To the left of the ephebeion would be a room for storing oil, and a group of rooms for a furnace and hot baths. Hot baths were a Roman necessity and were not found at Olympia however. This may have been because of the scarcity of water at Olympia.[8] The baths at Olympia were simple but those at Delphi were large and elaborate.[9]

On rainy days, wrestling was taught and practiced beneath the two to four roofed colonnades that lined the yard. Just off these colonnades were dressing rooms, rooms for bathing, storage rooms, and rooms for lectures and meeting friends. These rooms were often used for homosexual or pederastic trysts.

Hermes Enagonios ("Hermes of the Contest") presided over the palaestra. He was depicted on a rectangular piece of marble as a head and an erect penis. Hermes was the god of wrestling and sometimes said to be the father of Palaestra, the goddess of wrestling. In Greek art, a herm often indicates the scene is a palaestra. Statues of Apollo and Herakles also stood in a palaestra.[11]

Life in the palaestra[edit | edit source] 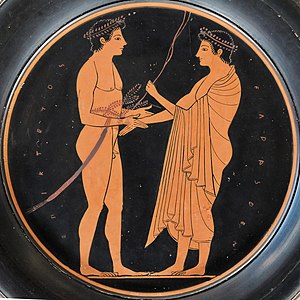 Wrestler and trainer (or judge) in the palaestra

Wrestling was a highly esteemed sport in ancient Greece. It was less rough than boxing or the pankration. It required less space than other sports, and, as a result, was the most popular sport among athletes. References to the sport are frequent in the literature of ancient Greece, especially poetry.[3]

Males of all ages joined palaestras, just as modern men and boys join the YMCA, gyms, or health clubs.[3] Greek men developed an affection for the gymnasiums and the palaestras where they grew up, and some were buried in their favorite gymnasium or palaestra. These buildings could be a center for politics: the plot to free Thebes from Sparta was formed in a palaestra and a revolt against Macedon found its supporters in the gymnasiums and palaestras of Argos.[1]

In a place where men, young men, and boys were nude, homosexual interaction was common. The authorities tried unsuccessfully to curb it. Greek vase paintings of males in the palaestra show teens goosing each other or older males offering love gifts such as hares to teens. In Lysis, the Athenian philosopher Sokrates is pulled into a palaestra by a group of teenagers. They tell him that one of their number is in love with another. Most Greek males considered a homosexual relationship a positive palaestra experience. Archaeologist Stephen Miller writes that Eros was worshipped as much as Hermes and Herakles in the palaestra.[14]