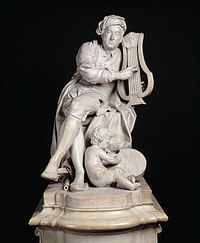 Statue of Handel by Louis-François Roubiliac, 1738

An oratorio is a musical work for orchestra, vocal soloists, and choir. Oratorios are usually, but not always, based on a Biblical subject. They are dramatic. Unlike opera, they are strictly a concert piece and are not staged. The first oratorio is said to be Emilio de Cavalieri's Rappresentatione di Anima, et di Corpo of 1600.

In the Baroque era of music, Handel wrote many oratorios, both sacred and secular. His sacred oratorios include Messiah, Esther, Solomon and Israel in Egypt. His secular oratorios include Semele, Acis and Galatea, and Hercules.