Nostradamus (14 or 21 December 1503 – 2 July 1566) was a French astrologer. One of his most famous book is Les Prophéties (The Prophecies). Because of the book, he was invited to Catherine of Medici's court, where he made predictions for the queen. 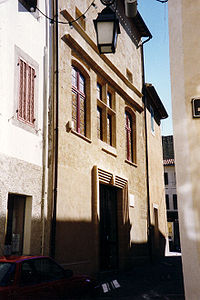 Nostradamus was born as Michel de Notre-Dame (or "Nostredame") on 14 December 1503 at Saint-Rémy-de-Provence, in a large family.

In his youth, he was called ‘‘the young astrologer’’ by his friends because he had a passion for astrology. He said that he was able to divine the future and explain the movements of stars. The people often laughed at him.

Around 24 years, Michel went to Montpellier to study and get his doctor. But he failed and went to live in Agen.

He married there and started a family, but his children and his wife died of the plague. He went travelling alone in France to heal others.

Around 40 years, Nostradamus came back to his native region, the Provence. There, he wrote a book entitled Les Prophéties under the pseudonym "Nostradamus". The book was very criticized, but it was also a big success. It was formed by some prophecies in quatrains. Some people think the content is nonsense and everyone can understand what he wants, but other people think on the contrary that the prophecies are very clear and become reality.

Because of his fame, Catherine of Medici, who wanted to meet the astrologer, called him to her court in 1555. Nostradamus was quickly esteemed by the queen because he predicted the future for her. For example, he predicted that the queen's three sons were going to each be a king of France. That later became true.

"The young lion shall overcome the older one,
on the field of combat in single battle,
He shall pierce his eyes in a golden cage,
Two forces one, then he shall die a cruel death."

In this prophecy, we can understand what Nostradamus predicted to the queen: he announced that an old lion will be killed by a young lion. Four years later, during a duel, Henry II of France was seriously wounded by Gabriel de Montgommery, younger than him. He died a few days later (10 July 1559) because of his injuries. Some people think this was Nostradamus's prediction. In addition, Nostradamus is believed to have correctly predicted 9/11, the rise of Adolf Hitler, the election of Donald Trump, and the Atomic bomb.