The North Sea is a sea in northern Europe. It is part of the Atlantic ocean. The North Sea is between Norway and Denmark in the east, Scotland and England in the west, Germany, the Netherlands, Belgium and France in the south. About 80 million people live near the North Sea, at most 150 km away from the coast. Together with the English Channel in the south, the southern North Sea is the busiest body of water in the world.

The border between the North Sea and the Skagerrak is at an imagined line between Lindesnes in Norway, and Hanstholm in Denmark. In the North, the North sea is open towards the Atlantic. The border between the two is an imagined line from Northern Scotland, to the Shetlands, and then to Ålesund in Norway. According to the Oslo-Paris Treaty of 1962 it is a bit more to the west and the north though. The treaty puts it at 5° East longitude, and 62° North latitude. That is at the parallel of the Geirangerfjord in Norway.

Rivers that drain into the North Sea include: from the United Kingdom, the Tay (at Dundee), the Forth (at Edinburgh), the Tyne (Tynemouth, South Shields), the Wear (at Sunderland), the Thames, and the Humber (at Hull); from Germany : the Ems, the Elbe (at Cuxhaven), the Weser (at Bremerhaven); from Netherlands, the Rhine and Meuse or Maas (at Rotterdam), the Scheldt (at Flushing or Vlissingen);

The Kiel Canal in northern Germany, one of the world's busiest artificial waterways, connects the North Sea with the Baltic Sea.

Its name comes from its relationship to the land of the Frisians. They live directly to the south of the North Sea, and to the west of the East Sea (Oostzee, the Baltic Sea), the former South Sea (Zuiderzee, today's IJsselmeer) and the today reclaimed Middle Sea (Middelzee).

But the spread of the naming could also be from the view of the cities of the medieval Hanseatic League. Some of its main cities, like Lübeck, Bremen or Hamburg had basically the same view.

File:Doggerbank.jpg
Satellite picture of the north sea. The area marked in red is the Doggerbank

Most of the North sea is on the European Continental shelf. On average, the depth is about 93 to 94 meters only.

About 200 km east of the Scottish city of Dundee generally, the water is about 90 meters depth there . But there are many trenches, named the Devil's hole . The trenches very often are only a few kilometers in length. In these trenches, the depth increases to up to 230 meters. 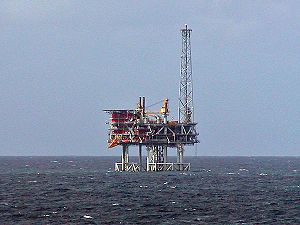 Oil platform in the North Sea

In the 1960s geologists found large areas of oil and natural gas under the North Sea. Most of the oil fields are owned by the United Kingdom and Norway but some belong to Denmark, the Netherlands and Germany. Drilling began in the 1960s and led to an argument between England and Scotland about how the revenue (money) from the oil should be spent.

People have been fishing in the North Sea for thousands of years. However, so many fish are now caught there that new ones may not be able to grow fast enough to keep the fishery going.