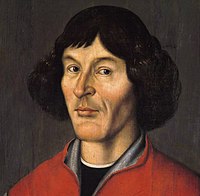 Nicolaus Copernicus was a Polish Renaissance mathematician and astronomer. He was born in 1473 and died in 1543. He is best known for his theory that the Sun and not the Earth is at the center of the universe. Copernicus's skills were not limited to just astronomy. Among other things, Copernicus was also a physician, scholar, economist, translator, mathematician, artist and diplomat.

He was the fourth and youngest child born to Nicolaus Copernicus Sr. and Barbara Watzenrode. His father was a merchant and local official. When Copernicus was 10 his father died, and his uncle, a priest, ensured that Copernicus received a good education.

In 1491, Copernicus entered the University of Cracow, in Poland where he studied painting and mathematics. Copernicus became interested in astronomy and started collecting books on the topic.

In 1496, Copernicus left and traveled to Italy, where he joined a religious law program in the University of Bologna. There, he met astronomer Domenico Maria Novara, a fateful encounter, as the two began exchanging astronomical ideas and observations. They were so captivate in their intellectual exchange, they decided to become roommates.

The rest of his life[edit | edit source]

After passing the test on his first attempt, he hurried back home to Poland. Copernicus remained at the Lidzbark-Warminski residence for the next seven years, working and tending to his elderly, ailing uncle, and exploring astronomy whenever he could find the time.

Copernicus became a symbol of the brave scientist standing alone, defending his theories against the common beliefs of his time. Copernicus died on 24 May 1543

He published an early description of his "heliocentric" model of the solar system in Commentariolus  in 1512[1].

Here we can see that he thought the Sun was at the centre of the Universe. He believed that all the planet were turning around it by following a perfect circle, and that the stars were fixed.

His second book on the topic, De revolutionibus orbium coelestium, was banned by the Roman Catholic Church not long after his death in Frauenburg, Poland.

Copernicus worked for the Church, which thought that the earth was at the center of the universe (geocentrism) but he thought that the sun was at the center of the universe (heliocentrism). The Church decided to mock him by hiring clowns to go around the village jeering his theories and impersonating the “crazy priest”, as they called him. Copernicus was unperturbed & smiled when his friends told him about the ridicule. “Let them, the movement of the heavenly bodies will be influenced not in the slightest either by the ridicule or the respect of these foolish men.”