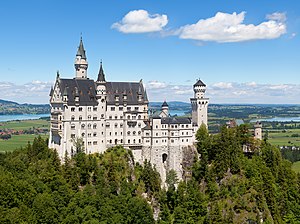 Ludwig paid for the palace out of his personal fortune. He also borrowed funds needed for the castle's construction, instead of using tax dollars. Construction began on 5 September 1869.

The palace was opened to the public after the king's death in 1886. Thousands of people visit the castle every year. It has appeared in many movies and was the inspiration for Sleeping Beauty's castle in Disneyland.