A mushroom, or toadstool, is a type of fungus. They usually have a pileus, or a cap, a stipe, or a stem and produce spores. Most mushrooms are gilled. Some mushrooms are edible. 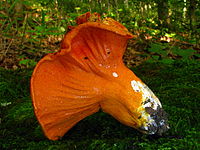 The earthstar is a type of mushroom. Unlike other mushrooms, it doesn’t have gills and releases its spores by shooting them out through a hole in the fruiting body. Earthstars also look different.

Gasteroid fungi are a group of fungi. They don’t have gills. Some resemble pouches and shoot out their spores.

The stinkhorn is the common name for the family of mushrooms Phallaceae. The stinkhorn has gleba inside of it.

Many species of mushrooms seemingly appear overnight. They also seem to grow or expand rapidly.