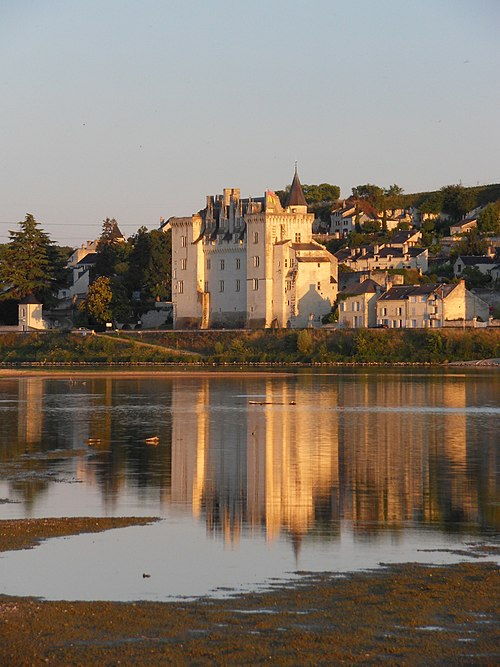 View of Montsoreau, from the Loire river

Montsoreau is a historic town in the Loire Valley in western France. It is part of the department of Maine-et-Loire, Pays de la Loire region, and situated 250 kilometers from Paris. Montsoreau is famous for its Château.

The town is part of the French association of The Most Beautiful Villages of France.

In 2000, the Loire Valley between Sully-sur-Loire and Chalonnes, in particular Montsoreau and the Château de Montsoreau, was inscribed on the list of World Heritage sites by UNESCO.

The name of Montsoreau comes from the rock on which is currently built the castle of Montsoreau, Mont Soreau (in Latin Mons Sorello, monte Sorello or Monte Sorelli). No explanation was given on the interpretation of the name Sorello.[1][2]

Variations of the name[edit | edit source]

Montsoreau is a very old place, which still holds Neolithic and Gallo-Roman remains. The first texts mention a fishing village in the year 600 under the name Restis (Filet). According to archaeological excavations, it seems that at that time a temple or an administrative building occupied the rock of Montsoreau.[3] It is the Count of Blois, who first (996) build a fortress on Mount Soreau. This fortress was very quickly conquered by the Count of Anjou, who subsequently modified it and made it impregnable.[4] It was taken only once in its history, by the King of England Henry II, in 1152. In 1450, John II de Chambes (the first adviser to King Charles VII) bought the fortress from his brother-in-law, destroyed it and built the castle still in place.[5]

The site where the city is built is in the immediate vicinity of the confluence of the Vienne and the Loire rivers. The city is crossed by the Loire and has an island on its right bank, the island of Than.

Montsoreau is a small town of 447 inhabitants and it is part of the agglomeration of Saumur-Val de Loire which has a little more than 100,000 inhabitants.

Source : this page has been adapted from the page « Montsoreau » on Vikidia in French. (Authors list)
Retrieved from "https://en.vikidia.org/w/index.php?title=Montsoreau&oldid=111144"
Categories:
Hidden category: