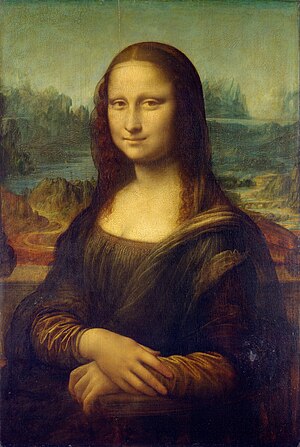 Mona Lisa is an oil painting by Leonardo da Vinci. It was painted in the early 16th century. The painting has been displayed in The Louvre in Paris since 1797. The subject's smile has caused comment for centuries.

In modern times, Mona Lisa has been vandalized a few times, and has been stolen once. It is now displayed behind bullet-proof glass. The painting is considered one of the greatest works of art in the western world.

The subject of the painting is probably Lisa Gherardini, the wife of silk merchant Francesco del Giocondo of Florence, Italy. Mona is a form of Madonna (my lady) in Italian. Her smile has caused comment for centuries.

King Francis I of France bought the painting, and kept it at the Palace of Fontainebleau. The painting was given to King Louis XIV of France. He moved the painting to the Palace of Versailles. In 1797, it was placed on display in The Louvre in Paris. It hangs there now. It was removed for safety several times during modern wars. It is the property of France.

In 1911, the Mona Lisa was stolen by an Italian museum guard. The thief took it to Italy. He was hailed by many Italians as a patriot and a national hero. The painting was displayed around Italy in several places. In 1913, the painting was returned to The Louvre.