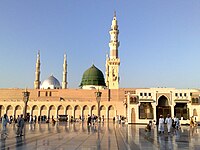 The Mosque of the Prophet

Medina (Arabic: المدينة المنورة, Al Madinah al Munawwarah) is a city in western Saudi-Arabia, located 320 kilometers north of Mecca. The population of Medina in 2006 was 1.3 million. Muhammad is considered by Muslims as a prophet and messenger of Allah, he died here. In pre-Islamic times the city was known as Yathrib.

In Medina is the Mosque of the Prophet located, where Muhammed died.