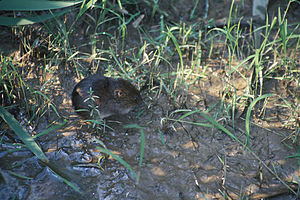 A meadow vole among grasses in Virginia, US

The meadow vole (scientific name : Microtus pennsylvanicus) is a North American vole. It is also known as field mouse or meadow mouse. It can be found in Canada, Alaska and the northern United States.

Weighing less than 50 grams (1.8 ounces), this stout vole is 15 to 20 cm (5.9 to 7.9 inches) long, including its short tail (3 to 6 cm). The dense, soft fur is chestnut-brown above and gray or grayish buff on the underparts; some individuals are much darker.

The meadow vole is active year-round, usually at night. It also digs underground burrows. It stores food for the winter and females give birth to their young in these burrows.