From Vikidia, the encyclopedia for 8 to 13-year-old children that everybody can make better
(Redirected from Mary Todd Lincoln)
Jump to: navigation, search 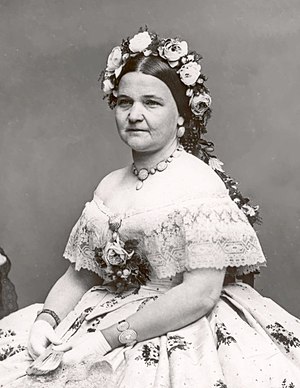 Mary Ann Todd Lincoln (née Todd; December 13, 1818 – July 16, 1882) was the wife of the sixteenth President of the United States, Abraham Lincoln. She was First Lady of the United States from 1861 to 1865. Todd and Lincoln had four sons. Only one son outlived her. She was with her husband when he was assassinated by John Wilkes Booth in 1865 at Ford's Theater in Washington, D.C. Todd suffered from migraines and other illnesses throughout her adult life. She died in Springfield, Illinois.