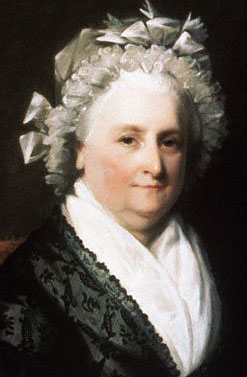 At 18, she married Daniel Parke Custis, a tobacco planter 20 years older than she. She bore him four children. Only two, John "Jacky" and Martha "Patsy", survived to young adulthood. She was widowed in 1757 at age 26.

In 1759, she married George Washington, a colonel in the British army. Their marriage was one of mutual affection and respect, but not one of passion. The Washingtons had no biological children.

During the American Revolutionary War, Washington provided food and clothing to the American troops, and urged other colonial women to do the same. The veterans loved her and addressed her as "Lady Washington". 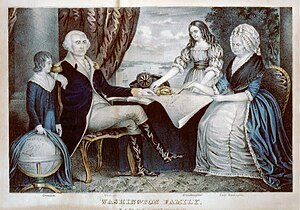 "The Washington Family", printed about 1835

George Washington was unanimously elected president in 1789. Martha served as First Lady from April 30, 1789 to March 4, 1797. She found the job unpleasant. She complained of the journalists who followed her everywhere and of the many restrictions placed upon her as First Lady (she was not allowed to accept dinner invitations, for example).

She died in Mount Vernon on May 22, 1802. Her obituary (death notice) was widely printed in regional newspapers. She is buried in the vault at Mount Vernon. She was the first historical female figure to be depicted by the United States government on postage stamps and currency.