Marseille is the largest city in southern France, the provincial capital of Provence-Alpes-Côte d'Azur and the department of Bouches-du-Rhône, as well as the first port of France, sixth of the Mediterranean and at the European level. Founded by the Greeks during Antiquity, it is one of the oldest French cities. Considering the number of inhabitants of the municipality alone, it appears to be the second largest city in France, after Paris. In reality Lyon, despite having fewer inhabitants of Marseilles in the municipal area, considering the metropolitan area exceeds one and a half million inhabitants, contending for Marseille the supremacy of the second city of France.

Marseille was the European Capital of Culture in 2013, together with Košice. 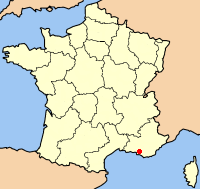 The inhabitants of Marseille are the Marseilles

The nationality of the inhabitants of Marseille is France

The flag of Marseille is white whit a blue cross.

There are many celbrations in Marseille, among them: Festival of Marseille - Island festival - The wind festival

The Vieux Port (Old Port), around which the city developed over the centuries. Symbol of Marseille together with the Basilica of Notre Dame de La Garde that stands out on the hill as to protect it and greet the sailors, the Vieux Port was changed in 2013 in conjunction with the award of Marseille Capital of Culture: the central part of the Vieux Port houses a large mirror structure that protects the passers-by from the elements and allows the latter to look at each other by raising their heads.

Also from 2013, the Vieux Port houses the paid Ferris wheel that previously used to stop along the beaches of the Pointe Rouge district.

-The Jardin des Vestiges (Garden of Vestiges), where there are the remains of the port where the Greeks landed

-La Canebière, the central avenue of the city that once connected the fields to the north of the city with the Vieux Port

-Le Panier, the oldest district in the city

-Notre Dame de la Garde, the basilica located on the highest mountain in the city

-The Castle of If (the Château d'If), former prison located on an island in front of Marseille where the Count of Montecristo

The nickname of Marseille is "the Phocaean city", because it was founded (under the name Massalia) around 600 BC as a colony of the ancient Greek city Phocaea (now named Foça and located in Turkey).

Marseille has an important port, the great seaport of Marseilles, while the historic Old Port of Marseille, in the center of the city, remained as a marina after the construction of the new port in the nineteenth century.

THE TYPICAL DISHES OF MARSEILLES ARE:

-The Bouillabaisse, is a stewed fish soup, according to tradition is composed of four different types of fish and local. The Bouillabaisse is served in a very special way, in a dish the fish soup, the croutons and the rouille, a very spicy Provençal sauce with fish flavor, and apart from another dish with the pan-fried fish. -The Paninesses Fris, chickpea flour and water cooked together until the consistency similar to polenta,cut into cubes and fried in olive oil,finally served hot -The Navette,a biscuit exclusively handmade,this is its peculiarity,and very tied to the holidays.The ingredients are eggs,sugar,flour,butter and orange blossom essence

Among the most famous writers of marseille there is Jean-Claude Izzo, who has done many works including a very beautiful work that is Fabio Montale's trilogy.