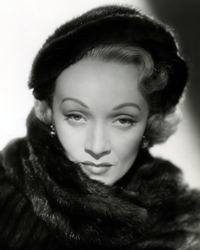 Marlene Dietrich was an American actress and singer. She was born on 27 December 1901 in Berlin, Germany. She became an American citizen in 1939. She died 6 May 1992.

Dietrich started her theatrical career in 1921. She made her first movie for Germany in 1923. In 1930, the movie The Blue Angel made her famous.

In 1939, she received American nationality to denounce Nazism. During World War II, she helped American soldiers by entertaining them.

In 1964, she became sick and said she would continue making movies only for money. In 1975, she broke her neck, and quit the movies.