From Vikidia, the encyclopedia for 8 to 13-year-old children that everybody can make better
Jump to: navigation, search
Marcus Aurelius was an emperor (ruler) of the ancient Roman Empire. 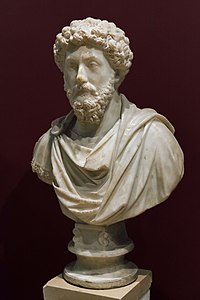 Although he was evil to the Christians he was thought by his people to be a good leader. Christians were thought to be the worst enemies of Rome.

He was a Stoic philosopher, that is, a thinker and writer about life. Stoic ideas tell about how to live a good life and treat others well. People should not care about fear, or pain, or being happy, but should think right in order to live right. Aurelius wrote his own thoughts about being a Stoic. This book, now called Meditations is still read by people today.

While he was emperor there was much trouble for Rome. The German barbarians attacked the borders. Terrible plagues (illness) sickened and killed many people. And there was a revolt by a Roman army led by his enemy Avidius Cassius.

Today we think that after Aurelius died in 180, the Roman Empire started to break up.