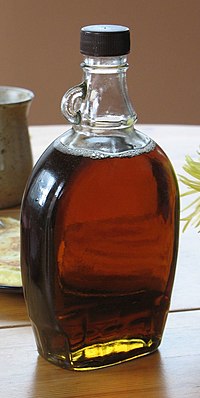 Maple syrup is a sweet syrup made from the sap of maple trees. The process of turning sap to syrup involves removing the water from the sap. Syrup is the result. It is packaged, sold, and consumed. Maple "sugaring" has a long history in North America. Both Native Americans and European settlers had a festive time in the spring when the sap was collected and processed. Maple syrup is eaten with pancakes, French toast, and waffles. It is used as a flavoring in pastries, Boston baked beans, and candy. In 2014, Canada produced the majority of the world's maple syrup.

Stand of maple trees (or "sugarbush") being tapped for sap

Before winter, maple trees store starch in their trunks and roots. This starch is naturally changed to sugar. It rises in the sap during the warm days of spring. When the sap is rising, a hole may be bored in the trunk with an auger or power drill. The sap is collected in a bucket or plastic bag, and then sent to a "sugar shack" where it is boiled to remove the water. The result is maple syrup.

Making maple syrup and sugar has a long history. Native Americans of the northeast collected maple sap and made syrup long before European settlers arrived in North America. Native Americans developed rituals around making maple sugar and syrup. They celebrated the first full moon of spring (the Sugar Moon) with the Maple Dance. They used stone tools to tap the trees, and then used reeds to run the sap into [[birch bark buckets. The water was removed by dropping hot stones into the sap, or letting the water freeze and the layer of ice rise to the top.

Native Americans showed European settlers how to collect the sap and how to process it. The settlers bored holes into the trees with augers rather than stone tools. They used wooden spouts rather than reeds to run the sap into wooden buckets. The collected sap was carried to a nearby "sugar shack" where it was boiled in iron kettles and pots, and then packaged, sold, and consumed.

As the years passed, modern improvements made the process easier and faster. In modern times, "sugaring" has become a large-scale commercial production, but some country people and farmers in the northeast still collect maple sap using the traditional methods. Their products are sold locally in shops and farmers markets.

In 2014, the Canadian province of Quebec was the world's largest producer of maple syrup. Maple syrup and candies are sold at airports as souvenirs of Canada. The maple leaf is the prominent motif on the Canadian flag.