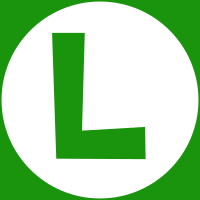 Luigi is a video game character. He is the younger (and taller) brother of Mario. He is playable in many games, like Super Mario Galaxy and Super Smash Bros. Brawl (where he is a hidden character). He wears green overalls and a cap with a green L on it. He owns his own mansion in (Luigi's Mansion), that is haunted by ghosts.