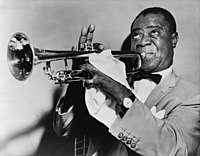 Louis Armstrong was an American musician of jazz and a trumpeter. He was born in 1901 in New Orleans and he died in 1971 in New York City.

Louis Armstrong lived a difficult childhood because his family was moneyless. He learned to play the trumpet and he played it in the brass bands and in the boats of the New Orleans. In 1919, he took place in the orchestra of Kid Ori. In 1922, he departed New Orleans for Chicago in order to rejoin the Creole Jazz Band, and he went to New York for playing with the orchestra of Fletcher Henderson. He did a lot of records by the pianist Clarence Williams. During the next thirty years, he did 300 concerts. In 1964, he records the most famous and sold single of him, Hello, Dolly. He died in 1971 due to a heart attack.