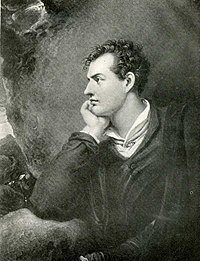 Baron George (Gordon) Byron called Lord Byron was a famous British poet. He lived from 1788 to 1824.

When he was 10 years old he was given his title, land and money. He was born lame and had an unhappy childhood.

His odd life, good looks, and many love affairs made him a celebrity in Europe.

His most famous poem Don Juan was never finished.

He joined the Greek movement to gain freedom from Turkey. While helping the Greeks, he died from fever in Missolonghi, Greece.