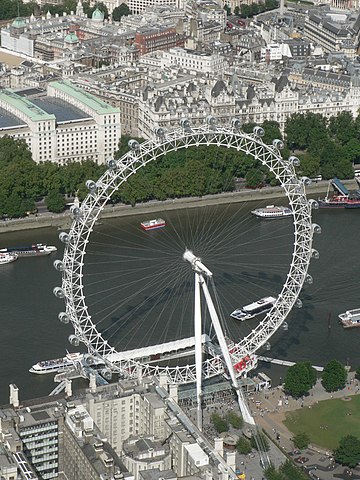 An aerial view of the London Eye

The London Eye is a large metal Ferris wheel. It is also known as the Millennium Wheel and is one of the largest observation wheels in the world. Since mid-January 2015 it has been known in branding as the Coca-Cola London Eye, after an agreement signed in September 2014.

The Eye was opened in 2000. It is 135 metres high. At the time it was built, in 1999, it was the tallest giant wheel in the world, and at present it is Europe's tallest Ferris wheel.[1] It offered the highest public viewing point in London.[2] The 245-meter observation deck on the 72nd floor of The Shard is now the highest public view of London.

It is the most popular paid tourist attraction in the United Kingdom: there are over 3.5 million visitors annually, and the Eye has made many appearances in popular culture.

The London Eye stands at the western end of Jubilee Garden, on the South Bank of the river Thames, between Westminster Bridge and Hungerford Bridge.