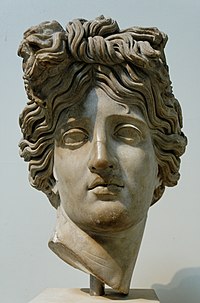 Ancient sculpture of Apollo now in the British Museum

This is a list of the gods and goddesses of Greek mythology. Roman Mythology uses different names, calling Zeus by the name of Jupiter, and Aphrodite by the name of Venus, for example. The Roman names are often better known to English-speaking people than the Greek names.

These gods are the most important and powerful gods. The home of these gods was Mount Olympus, except for Hades who is only allowed on Olympus once a year. Hades lives in the Underworld the rest of the time.