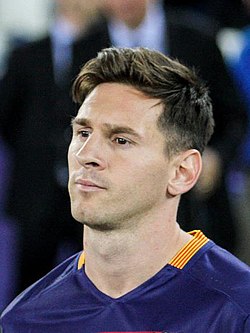 Lionel Messi (full name: Lionel Andrés Messi Cuccittini) is a professional footballer that was born in Rosario, Argentina. Messi plays at the national team of Argentina and forward at FC Barcelona. People say he's one of the best footballers in the history. Messi won the FIFA World Player of the Year/FIFA Ballon d'Or six times, and he is the first player that won the Golden Shoes three times. He also won with Barcelona 7 La Liga's, the UEFA Champions League four times, and the Copa del Rey (cup of Spain) three times. Messi has various records like: the most goals scored in La Liga (50 goals), most goals scored in a year (91 goals), most goals scored in a single season (73 goals), and most goals in a Champions League match (5).