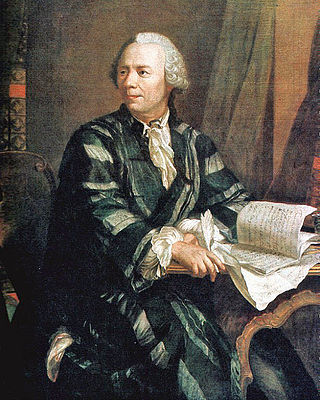 Leonhard Euler (b. 15 April 1707 - 18 September 1783) was born in Bâle, in Saint-Petersbourg, Russia. Euler was a mathematician and also studied physics.

He studied at the university of Bâle in 1720-1723. Leonhard Euler was one of the greatest mathematicians of all time. His numerous works (over 900 publications) in many areas had a decisive influence on the development of mathematics, an influence that is felt to this day.[1] Euler had eighteen children.

He worked in include his theory of the production of the human voice, the theory of sound and music. In his study of colour effects, Euler hoped to make use of the observation of the conjunction of Venus and the moon, due to take place on the 8th of September 1729. However, no such effects were observed during this conjunction, and Euler was forced to wait for the eclipse of the sun which would take place in 1748. He observed this eclipse in Berlin, where he moved in 1741. Here he worked in the Berlin Academy of Sciences and was appointed as head of the Berlin Observatory, and was also tutor to the nieces of King Frederich II of Prussia. Euler was able to recite 9000 verses oh the Eneid.

Euler, working on the day of his passing, suffered from a brain hemorrhage and died during the night of September 18, 1783, in Saint-Petersburg, Russia.