a portrait of Fibonacci from Dall'opera I benefattori dell'umanità; vol. VI, Firenze, Ducci, 1850

Leonardo Pisano Fibonacci, know as Leonardo Fibonacci, Leonardo of Pisa, Leonardo Bonacci or Leonardo Bigollo, was an Italian mathematician. He is possibly the greatest European mathematician of the Middle Ages. He is known for his book Liber abaci (1202), for popularizing the "Hinu­arabic numeral system" in Europe and for the Fibonacci numbers.

He was born in Pisa around 1175 and died around 1250. He was the son of Guglielmo Bonaccio. Guglielmo Bonaccio's job was to represent the people trading in Bugia today's Bejaia, Algeria, in North­-Africa. So Leonardo grew up and studied in North ­Africa. As a young boy Fibonacci traveled a lot with his father. One time they were in Bugia together. It was here Leonardo learned about the Hindu-Arabic numeral system. As he traveled he meet many mathematicians. They often showed him their systems of doing arithmetic. Leonardo Fibonacci saw the advantiges of using the Hindu-Arabic numeral system.

Around 1200 he returned to Pisa and in 1202 he wrote his book Liber abaci. The title Liber abaci means book of Abacus or book of Calculation. The book popularized the "Hinu­arabic numeral system" in Europe. He most likely died in Pisa, around 1240-1250.

It's in Algeria, more exactly in the city of Béjaïa, that Fibonacci began to study the mathematics and his father learned him quickly the Indo - Arabic calculation. He had the luck to travel a lot like in Egypt, in Syria (...) what allowed him to meet different mathematicians and get new knowledges around the mathematics.

He was one of the first people to introduce the Hindu-Arabic number system to Europe - the positional system we use today - based on ten digits with its decimal point and a symbol for zero: 1 2 3 4 5 6 7 8 9 0.

The original problem that Fibonacci investigated (in the year 1202) was about how fast rabbits could breed in ideal circumstances. Suppose a newly-born pair of rabbits, one male, one female, are put in a field. Rabbits are able to mate at the age of one month so that at the end of its second month a female can produce another pair of rabbits. Suppose that our rabbits never die and that the female always produces one new pair (one male, one female) every month from the second month on. The puzzle that Fibonacci posed was... How many pairs will there be in one year?

Here is an illustration to explain the problem:

This sequence is build in a manner that next number is found by adding up the two numbers before it.

The ratio of a number with the precedent (for example 34/21) approaches the golden ratio, which is approximately 1.618 and is found in the nature and in paints, sculptures,architecture, etc...

You can also make a spiral with the Fibonacci sequence, by putting side by side squares like this: 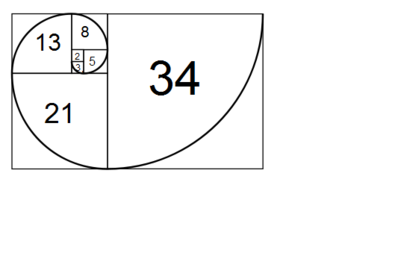 During his life Leonardo Fibonacci has passed loads of time in the nature to observe all the animals. It's this animals which have inspired the mathematician in his experimentations. 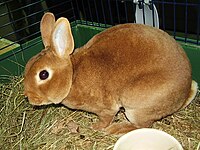 Picture of a rabbit

Picture of a grapevine snail

It's very interesting to see the links between the Fibonacci's works and the natural events. It's a work really mysterious of Fibonacci which is know and use all around the world. This work is the golden ratio. This number mentioned in the part... is so exceptional that it is still today a reference. It's by the division of two consecutive numbers in the sequence of Fibonacci that it's got like it's explain in the part... With this magic number, Fibonacci had find how create optical illusions. With the observation of the plants (especially flowers), the universe, the fingerprints, the naturals events (like the waves), Fibonacci had find relation mathematics which explain the naturals developments, phenomenas.

Actually we know that it's also the travels of the mathematician in Egypt, Syria or Algeria which he had give relations, maths experiment or style of writing. Of this journey born the Arabic calculation explained by Fibonacci. He has effectually find that the Arabic calculation was more adapted to the maths than other system. In the part it's possible to find what was the famous works of Fibonacci which had give him famous and which regroup the knowledges collected by the mathematician.