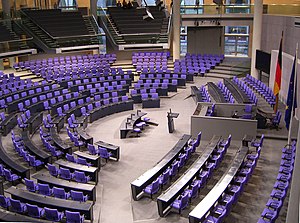 The German parliament, the Bundestag, is the legislature of Germany.

A legislature is the power or body, who makes and approves laws. In the separation of powers, which is invented by the French thinker Montesquieu, the legislature is one of the three powers. The other two powers are the executive and the judiciary.

In countries the legislature is mostly a parliament. In democracies, parliaments are chosen by the people in elections, directly or indirectly. In other democratic administrative divisions, legislatures are common. For example, a city has a city council.