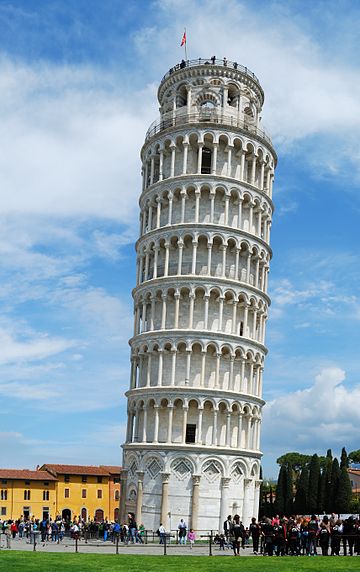 The Leaning Tower of Pisa.

The Leaning Tower of Pisa is a building in Pisa, Italy. It is a bell tower. It is famous because it is not vertical. The tower was once leaning more and more to the ground, but recently much restoration work has been done to stop it from falling over completely. There was scaffolding all around the tower for 20 years. On 26 April 2011, the last bit of scaffolding was removed so that the tower can be seen properly again[1]. 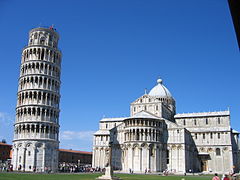 The Tower (on the left).

When the second floor was built in 1178, the tower started to lean. This was because it had a small three-meter foundation in soft soil. The design of this tower was bad from the beginning. Construction was stopped for almost 100 years because the people of Pisa were often at war with Genoa, Lucca, and Florence.