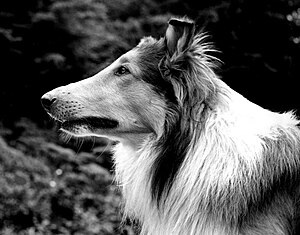 Lassie Come Home is an MGM movie based on the 1940 book Lassie Come-Home by Eric Knight. The movie was released in 1943, and was the first of seven MGM movies about Lassie. The movie stars rough collie Pal and Roddy McDowall. Child actress Elizabeth Taylor makes a brief appearance. The movie tells the story of a collie who travels hundreds of miles to be reunited with the boy she loves. The movie was remade in 2005 as Lassie.